Last night, George and I attended “Social Media” night at AT&T Park and it was fabulous! This year’s giveaway was suggested by the fans on Twitter (like last year), including yours truly, and was inspired by this: 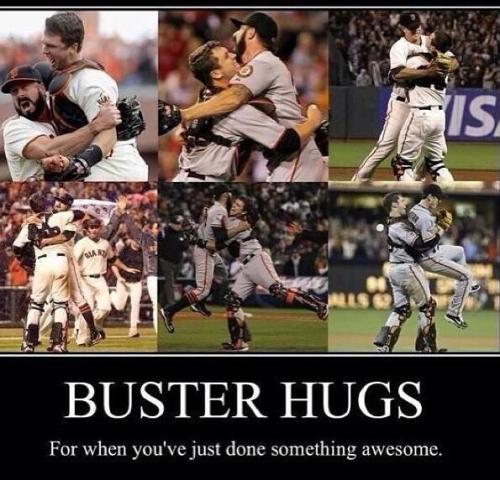 My new #BusterHugs t-shirt features the Romo/Buster hug after winning the 2012 World Series. Personally, I would have gone with the 2013 Tim Lincecum no-hitter Buster hug, but really, all Buster hugs are awesome.

Also awesome? THE GIANTS ACTUALLY WON! Tim Lincecum pitched a fantastic game! There was a moment when Timmy loaded the bases in the 4th with no outs. AND HE PITCHED OUT OF IT! That’s when I knew we had a chance to win. Hunter Pence was also amazing, getting hits and making fabulous catches in left field. Too bad Akemi missed it because he was clearly showing off. 🙂 It was my first win of the season (in three games), so I’m happy to finally see them do well when I’m at the stadium. I hope this trend continues, even when I’m not there.

Of course, today I’m home sick and feeling so wretched because I can’t have two good days in a row, now can I? Fingers crossed that I get back to my old self quickly as Mom and Dad are coming to town tomorrow and I’m ready to have fun!

All text, personal photos, and other material on Jenn In The City are copyrighted and may not be published, broadcast, rewritten or redistributed without permission.
%d bloggers like this: